The Grand Canyon is well known for its remarkably horizontal layers, especially as viewed from the rim. But venturing outside of this National Park (or even down into the canyon), you’ll find many cases in which sedimentary rock has been folded in to tight arcs, apparently without crumbling into pieces. In fact, Young-Earth creationists frequently present folded sedimentary rocks as evidence against the conventional age of the Earth. “If the rock were fully lithified,” they ask, “how could it have been folded without compromising the general structure of the layers?” As an alternative, they propose that these layers, by and large, were still soft (during or shortly after the Flood) when they were deformed into the shapes we see today.

A few years back, I responded to a brief article by Dr. Snelling, who listed sedimentary folds as one of the six best evidences for a young Earth. If this topic is new to you, I encourage you to read my article for a brief overview on how rocks fold and fracture, why this poses no challenge to the conventional geologic timescale, and why we should expect to find (and do find) abundant fractures in most folded sedimentary rocks.

If you venture down to the comments, however, you’ll find a set of very perceptive questions from commenter “copernicus365”, who has spent a lot of time thinking about the topic of sedimentary rock deformation. His questions (quoted below) deserve more than what I would offer briefly in the comment box, so I would like to share them here, along with my responses.

The question is not simply: “Are there any cracks to be found,” but rather: “Is it possible for lithified strata to contort into shapes in an apparently fluid manner?”

You’re correct. I addressed the question as to whether cracks were present, however, because authors like Andrew Snelling consistently misrepresent geological outcrops by insisting that the rocks did not fracture while being folded. The fact is, minor fractures (from tens of centimeters wide to less than a millimeter) are visible in every outcrop of folded sedimentary layers (even those pictured by ICR and CMI, if you look closely), but especially in hairpin folds. The trick is that Snelling’s photos are all taken from a distance to hide the ubiquitous presence of these features. But the phenomenon is remarkably well documented by oil companies and petroleum geologists (e.g. here), who depend on those fractures to carry oil and water freely through the rocks.

Before moving on, I want to point out that this settles the question as it relates to the age of the Earth. The presence of fractures associated with folding demonstrates unequivocally that these sedimentary layers were lithified prior to deformation. Therefore, ‘Flood geology’ provides no plausible mechanism by which to explain fine-scale features of the geologic column.

You yourself admit: “Nearly all rocks exposed at the surface are thoroughly fractured or faulted” … so I find the two minor examples of cracks you give above (see the two pictures) as insufficient.

I’m sorry that I could not provide more personal photos as examples, so I am relying on a couple tools to aid my claims: 1) Google image searches, and 2) a sincere exhortation for you to look closely the next time you drive past sedimentary folds in road cuts, because I am confident in what you’ll find. As for online resources, this page provides a fantastic photo tour of some amazing coastal outcrops in southern England. Note the evidence for brittle deformation (faults, fractures, and pulverizing of the layer into minor slabs):

To have solid lithified strata fold sometimes even in 90 degree angles, there should be evidence not simply of minor cracks *with still an overall fluid folding*, but rather nearly no fluid bending, and instead full on breakage and pulverization at the folds.

This is not true, unless the fold was created relatively swiftly, as in the case of sedimentary rocks in the Snake Valley of Great Basin National Park or nearby Death Valley. There, so-called ‘megabreccias‘—giant blocks of sedimentary rock that were pulverized into smaller blocks—formed as the valley was torn apart, so to speak, by frequent earthquakes and stretching of the uppermost crust.

When sedimentary rocks are folded slowly under pressure—not metamorphic pressures, just enough to confine the rock layers—it is possible for limestone, sandstone, and shale to deform without breaking up as you describe. This has been known experimentally at least since the late 1950’s (Handin and Hager, 1957; 1958) and remains valid today.

In the one example you gave above… notice how we do not see formerly flat strata *broken up into multiple smaller plates* to form the bend, without ever actually forming a curve. That’s not what we find. Look at the outside perimeter at the top or at any of the layers, notice how they form a fluid arc, a fluid fold. How did that happen with solid rock?

This is a keen observation and a very reasonable question. There are two reasons the layer structure remains intact and the arc appears ‘fluid’, as you describe. First, the strain is released gradually through millions of tiny fractures if the rock is bent slowly, rather than through a few large ones. This prevents the layers from breaking up into smaller plates, even as they are folded into a curve, but often these fractures are visible only under a microscope (see below). Secondly, sedimentary rocks are comprised of grains, which are cemented together—typically—by relatively weak minerals like calcite. The ability for sedimentary rocks to bend, therefore, depends more on the strength of the cement than the type of rock (e.g. Bruno and Nelson, 1991). Cements can crack or dissolve, allowing individual grains to shift around as though the rock were unlithified. Remember, buried rocks always have water flowing through them! This process can be identified under a microscope, because it results in distinct forms of cement between the grains, due to recrystallization.

Microfractures in shale as seen through a microscope. Image from CoreLab product description, but it aids my point!

Grab a stack of ceramic plates from your kitchen, now step on them. Do it slowly or over a long time of slowly adding more weight and pressure. Do the plates start to contort and bend around your foot? Of course not. These plates of course are not cemented together, but all that means (as a common sense expectation) is we can expect pulverization at the fold with the actual strata, since the strata have no empty space to ‘snap’ into, that bending energy will just result in material being pulverized, or in other cases, being metamorphically transformed.

Sedimentary rocks are fundamentally different from ceramic plates, so the analogy is invalid. Ceramic has been heat treated to the point that a glassy structure develops throughout the entire shape, whereas sedimentary rocks are grains bound only by tiny, imperfect crystals of calcite, hematite, or silica, for example. Hence ceramic will break cleanly and cannot deform through the process I described above.

For a technical article from us on this subject, rather than a popular level article which you were responding to (that point itself answers some of your questions about why Snelling did not go more in depth, or provide more detail pictures, which of course he could do), see: Tight Fold and Clastic Dikes as Evidence for Rapid Deposition and Deformation of Two Very Thick Stratigraphic Sequences, ICC 1986, pp. 3–13.

Thanks for the link. I have seen this paper before and dealt specifically with his unfortunately deceptive claims regarding the Ute Pass Fault and sand injectites in a previous article. I’m afraid Snelling’s treatment of sedimentary deformation is equally misleading. For one, the very existence of a boulder breccia (Figs. 1 & 2, below) contradicts the Flood geology portrait, because it implies that older rocks had to be completely lithified and were slowly eroded into angular boulders, before accumulating in the deposit at Split Mountain. Yet the underlying sandstones remained unlithified, according to Snelling? 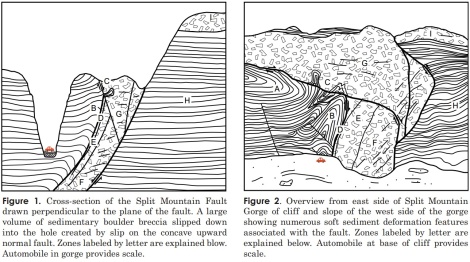 Secondly, Snelling’s description of the faulting event and emplacement of the boulder breccia—that “physical separation of hanging wall from footwall must have occurred as about 400 feet of vertical slip occurred on the fault. The gap or mismatch of hanging wall and footwall produced a long trench-like hole into which secondary faulting allowed overlying material to fall or flow”—is complete nonsense to any structural geologist. There is no reason to think that fault offset did not occur episodically, and Snelling’s own figure (Fig. 1) provides evidence for this. Instantaneous movement along the fault would not have created the concave deformation of sandstone layers adjacent to the fault, especially if they were still soft!

So, episodically formed tight folds in a water-saturated, weakly cemented sandstone offer no challenge to the conventional geological age of these rocks. If Snelling’s claims were even remotely valid, they could be published in an actual peer-reviewed journal. Even in his ‘technical’ article, Snelling did not provide the kind of details required by my critique of his popular article—namely, close-up photos of the microfractures, thin-section analysis, and details of grain cements.

You may also find interesting YEC geologist Emil Silvestru’s take on this question here (I was the one asking the question there).

Yes, his response is very interesting to me, so thanks again for the link. I myself wrote to Dr. Silvestru a few years ago regarding the dating of cave deposits (something I study), but I was disappointed by his response. In this case, Dr. Silvestru demonstrates for us that he understands structural geology rather poorly (or is intent on misrepresenting it). In his first point, he asks rhetorically why nobody has tried to deform sedimentary rocks experimentally, despite that such experiments (I linked a couple above) have been ongoing since the 1950’s! In the second point, he assumes falsely that metamorphic conditions should have been reached locally within formations like the Old Red Sandstone (e.g. at the apex of folds). But the conversion of sandstone to quartzite depends on more than temperature/pressure (it depends also on water moving through the rock). Besides, temperatures at the apex of the fold would not be significantly higher than for the rest of the rock, because strain is relieved through millions of microfractures, preventing temperatures from climbing due to strain (as in a metal plate!). As for the last point, it seems the owner of the photo to which Dr. Silvestru referred has already responded, and I would have little to add.

Thanks again for your comment, and I hope this clarifies some of my previous points. If not, feel free to follow up with more questions!

10 responses to “Is folded sedimentary rock evidence for a young Earth?”

My aim is to provide an online resource for Earth science education, particularly for the community of faith. More people than ever are leaving the church due to perceived conflicts between science and faith, yet creation-science ministries continue to claim that geological evidence supports a young Earth (less than 10,000 years). I examine those claims critically and provide a disciplinary context in which to evaluate the merits of young-Earth creationism.